The situation:
New cavers in town in need for a sturdy light to discover this hobby.
The solution:
First option is simple: go deep in your pockets, buy a dedicated modern caving light. The cheapest one available is Petzl Ultra Vario at 270 €. You’ll need also a spare accu. So, add another 80 €. Make the sum and you’ll end up with a small fortune. That’s too light for you ? Maybe you’ll want the most basic Scurion 700 for 500 € at which you’ll add also a 2-nd accu. So, „only” 590 € to welcome a newcomer in caving… .
The second option is to start digging around searching for a „normal price” headlight that should have at least waterproof construction, enough dissipated light at 2017 standards of power and helmet mounting capability. Beside that, using normal batteries have several advantages: cheaper (no dedicated Li-Ion), batteries could be found anywhere and you can carry several sets in a very long trip or biwak.

This is how I discovered the Asteri headlight from Edelrid.
Lots of positives:
– Released in 2016;
– 250 Lumens;
– spot and wide (through a dissipating plastic screen that slides over the spot lens);
– long burning time (13 hours for a set of AA at 250 lm);
– IPX 66 (powerfull water jets from any direction);
– can be fixed on a helmet with the optional mounting kit;
– 50 € ! (and 8 more for mounting kit).

The box is a transparent cube with the faces of 10 cm wide. You can see the actual headlamp inside it and also the features of the lamp on every face of the cube.
Inside the box there are:
– the lamp together with it’s battery case attached to an elastic strap;
– 3 AA Duracell batteries;
– user manual.

Specifications straight from the booklet: 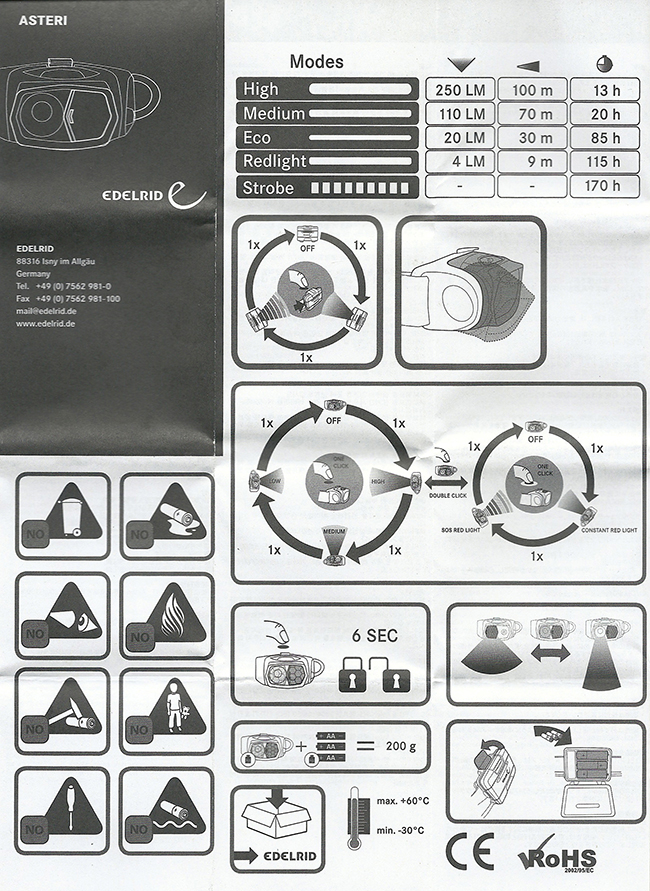 Basically we have two independent light switches: on front (white LED and red LED) and at the back (red LED). On the front side there are 3 modes for the main light – a white LED (20 lm, 110 lm, 250 lm) and a second red LED which can run on continuous or strobe mode. At the back, there is another LED inside the battery case that has it’s own switch that can activate the LED on continuous or strobe mode.

The booklet is in all european languages:

The front side (the reflector) is 5 x 3 x 3 cm (wide, height, depth) mounted on a 8 x 3,5 cm (wide, height) structure that stays on the elastic strap. The reflector can be tilted from 0 (straight ahead) to about 50 degrees (downwards).

The plastic diffuser can be slided over the main LED light or the red LED near it. Taking the headlamp off the strap is very simple and useful for permanent mounting on a helmet. For that you’ll need the optional Asteri Mounting Kit.

The back side consisting of the battery case is provided with another red LED with it’s own switch. There are 3 modes for this red LED at the back: off, continuous and strobe. It’s very useful probably in MTB, running or hiking in the night. Good that we can let it off.

Negative points:
– the plastic diffuser that is actually essential for a wide beam light is flimsy and you’ll hear it bouncing all the time;
– the helmet mounting kit attachment system consist of a simple 3M tape like those on the GoPro’s. While is tough enough for outside and occasional underground visits, caving with a headlamp fixed on helmet only with tape isn’t the best idea.

The solution: drilling holes in the mounting kit like in the other caving systems solves the problem.
Here is the Asteri on an older helmet, mounted with screws. In front, I fixed the Helmet Mounting Kit with 2 small screws from inside the helmet to outside. I just cut the surplus of the remaining screw that went through the clip. After that I clipped the reflector easily, was made for that :). The battery case I managed to fix it with 4 small screws without the Mounting Kit. It can be done easily because the battery case have already 4 small holes filled by default with screws that keep the compartment attached to the strap clip. I just used those holes with longer screws that passed through helmet ABS, strap clip and battery compartment.

The best way to run the cable between battery case and lamp is through the helmet, not to let it outside where it can catch everything. The entire thing looks like it was made from the factory.

Burning time
I let the lamp on full power (rated at 250 lm)  with a stop watch near it. I measured with a photographic external light meter the exposure at a certain distance when the battery were new then I repeated the measurements after 5 hours. Becauase the intensity of the light of this headlamp is not regulated, the intensity of light will decrease while the battery get depleted. But, after 5 hours was still running strong, the difference between T0 and T+5 hours is less than an F-stop in photography. Which is like getting from ISO 200 to ISO 100. Visually speaking it lost about half of the power.
This is actually an impressive performance. So, the stated 13 hours of burning time might be a reality considering that all manufacturers don’t want to follow a standard and they trick us by stating the burning time as being the duration between full power and the intensity of a candle at 2m. This is their „standard”, a candle power they consider is enough to walk in the dark. You can read about all these here.

Well, how’s the real light actually.
Let’s let aside numbers for now, we are always slaves of numbers like is the only deciding factor. How about human factor, our own eyes, senses.
I simply took outside my main caving lamp: Petzl Ultra Vario and fired it on the medium setting which is rated at 200 lm (210 lm ANSI standard). This is also the mainly used mode in caving. I turned the Edelrid Asteri on full power (250 lm) and here we go:

The main differences, beside the fact that the Asteri shines over (due to the fact it had 50 lm more), is in the dissipation of light. The beam of Petzl is more fluent, almost natural. It covers corners of our sight very well (that’s why I chose it). Then I got down on Earth: I just compared a 300 euros lamp over a 50 euros one. Period. Turning the Petzl on full power (520 lm) didn’t made sense for a fair comparison.

Final thoughts
The Edelrid Asteri is a small technology wonder that is showing us where the LED technology is today powered only by regular batteries that you can find at your corner boutique, gas station or whatever store in a small village.

Now I have to retire my already old LedLenser H7 which in 2011 was a top notch masterpiece at 160 lm. The Edelrid Asteri will be my next back-up light and the main light for some of my colleagues.